Fight goblins and other mystical creatures to defend your lands and save the princess!

Open chests and get rewards for victories to improve the armor and weapons of your warriors and crush your enemies. Win gold to build an indestructible castle that the entire medieval world will envy! Advance your heroes, promote your civilians and become the best leader of them all!

As the king, you should develop a wise strategy to win a medieval war, so you have to choose your warriors and create the army carefully. Buy weapons and think over the strategy and tactics of the battle before you fight. There won’t be a quick and easy win here…

Good strategy, worthy and equipped warriors will allow you to become the strongest king of the Middle Ages and strengthen your kingdom. Only experienced and brave knights will be able to defeat enemies and conquer their territories.

In the game you will explore multiple universes, each full of challenging quests and battles however it won’t be always so serious so expect to be entertained, brother! Come on, the princess needs saving!

What’s new in 1.00.12 version:
– Big changes in the game economy: prices and timings of buildings, storages’ capacity, resources’ gaining, crafting & spells upgrading costs, a new balance of resources thefts in PvP
– Additional PvE missions in the 2nd location
– Maps of the 3rd location were reworked significantly
– The first/repeated loading of the game is now faster
– Better performance of the entry scene
– Navigation from the quests window
– New unique animations in the rooms
– Added garrison upgrade animation
– A new effect of a finished construction
– Location’s boss and difficult missions are now shown all the time, no matter which level you have
– You can assign a dweller to a room that is being constructed or upgraded at the moment
– Spells upgrade happens faster, if you assign a dweller to the Altar of Researches
– Added an effect above fighters that were slowed down by enemies
– No time-out reboots during acceptation of policies, during the writing of messages to the support and name changes
– Changed the stands of the PvE missions and PvP battles icons on the locations maps
– Counter of unopened chests in the storage/dweller window
– Performance optimizations in the attacks/defenses history window
A new window of attacks that happened while you’ve been offline

Fixes:
– Amount of added/reduced rating for a victory/loss in PvP
– Representation issues in the offline defense history
– Representation issue of rewards for PvP battles
– Errors in finding PvP enemies accordingly to the player’s power
– Issues with potential and classes of newborn dwellers
– Bug in resources production, when the construction of a generator room was finished in the offline mod
– Bug in crafting spells during the upgrade of the Spell room
– Bug in the game behavior when placing a double room for construction
– The correct order of opening chests in the first scene (first items chests, then food chests)
– Correct work of the «back» button in different situations (Android)
– Many major and minor UI fixes
Fixed the equipment info window bug 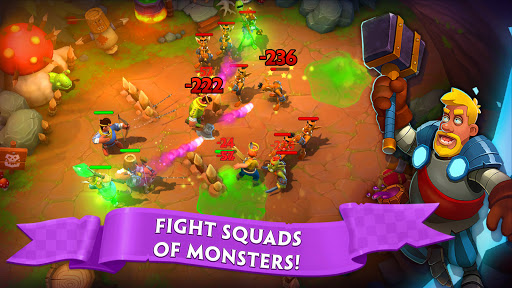